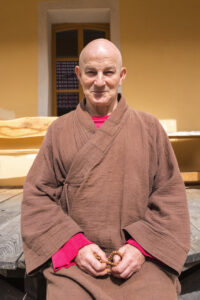 Venerable Dhammadipa (lay name Thomas Peter Gutman) was born in Czechoslovakia in 1949. He studied Chinese Literature and Philosophy at Prague Karl University, graduating in 1969, and then studied Russian literature at the Hebrew University of Jerusalem, where he received a degree in 1973.

In the late seventies Venerable began his Buddhist studies in Berlin, where he had immigrated as a refugee after the Soviet invasion of Czechoslovakia.

In 1977 he received a master’s degree in Chinese literature and philosophy at the University of Paris.

In 1979, he enrolled at Nalanda University in India (where he also taught French and German) to study Sanskrit and Buddhist Philosophy. After receiving a degree at Nalanda in 1984, he returned to serve as the Associate Librarian at Berlin University.

In 1986, Venerable Dhammadipa went to Japan and studied under Zen Master Harada Serrei Roshi of the Caodong school practice. He was given a Dharma name as Xing-Kong (meaning Nature of Emptiness).

In 1987, with the encouragement of Venerable Athurugiriye Nyanavimala Mahathera, Venerable Wijayasoma Mahathera, and Venerable Dikwelle Mahinda, he ordained as a monk in Meetirigala and was given a Dharma name as Dhammadipa (island of Buddhism or Dharma). He received the full Theravada Bhiksu ordination in Sri Lanka where he practiced meditation under the guidance of his preceptor, Venerable Nanarama Mahathera.

In 1989, he received the Three Fold ordination as a Mahayana Monk in Hsi Lai Temple, Los Angeles and began Dharma teaching in US, Germany and Taiwan.

In 1996, Venerable went to Myanmar to practice meditation with the contemporary master Venerable Pa Auk Sayadaw, and was recognized by the Sayadaw to be first of the Sayadaw’s Western disciples qualified to teach meditation. He has since been teaching Samatha (tranquil mental states) and Vipassana (direct seeing of the Dharma) meditation at monasteries and universities worldwide.

Venerable Dhammadipa speaks Czech, French, German, English, Russian, and fluent Chinese. He reads and translates Buddhist texts from Pali and Sanskrit. His translated works in French and Czeck include Treatise on the Awakening of Faith in the Mahayana (Mahayanasraddhotpada-sastra), Entry into the Bodhisattva Path (Bodhicaryavatara) and a Collection of Han-San’s Poems. His teachings in Taiwan have been compiled and printed in Chinese.

Over the years Venerable has presented dharma teachings and led meditation retreats around Europe, North America, Taiwan and mainland China, India and Southeast Asia. Personally he has a gentle and easy going manner.

His teaching follows the framework of the classic Theravada Buddhist commentary The Path of Purity (Pali: Visuddhimagga): one starts with training in the precepts (virtue) which lays the foundation for training in concentration and then the development of wisdom.

Venerable teaches that knowledge of the Buddhist way should be applied in practice and verified first hand through direct experience. One should make a great vow to tread the way and realize the dharma for the benefit of all sentient beings.

Venerable Dhammadipa is a rare gem in contemporary Buddhism.