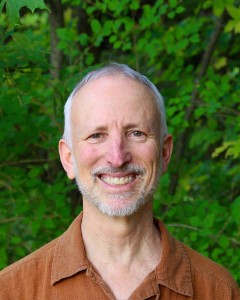 Greg Scharf began meditating in 1992, motivated by curiosity and a desire to understand the nature and cause of suffering both in his own life and in the world. He began formal retreat practice in the Theravada Buddhist Tradition at retreats taught by senior teachers from the Insight Meditation Society and Spirit Rock Meditation Center. His initial contact with Buddhist teachings and practice led organically to a desire to travel and practice in Asia. Travel led Greg to the discovery of a deep heart connection with Indian devotional traditions, and a retreat at Kyaswa Monastery in 1997 was the start of a long-term relationship with practice and service in Burma (Myanmar), which continues to this day. In the Fall of 1998 Greg ordained as a Buddhist monk and continued his training in robes through 1999. In 2006 he began a 4 year teacher-training program under the guidance of Joseph Goldstein, Jack Kornfield, Gil Fronsdal, and other prominent western Vipassana teachers. He completed this training in 2010, and has been teaching residential retreats since 2007. Greg has practiced extensively with a variety of lay and monastic teachers in the USA, Burma, India, and Thailand over the past 2 decades. Joseph Goldstein has been Greg’s primary teacher since 1996.

Greg’s teaching emphasizes the confluence of love and wisdom on the path to liberation, combined with the understanding that the meditative process is fundamentally an exploration of Nature. When we open to the true nature of the mind body process, we begin to see that awakening is an organic process that unfolds naturally as we penetrate and begin to abandon the layers of conditioning and patterns of habitual reactivity that cloud the mind and lead away from freedom. The spiritual path is not about finding something we do not have or becoming something other than we already are. Rather, as we learn to observe our experience from a place of stillness and balance, reality is accurately recognized and liberating insight arises as a natural result.

In his teaching, Greg stresses the critical importance of bringing the qualities of kindness and self-love to our meditation practice. Often, we find ourselves approaching our practice as though we are setting out into battle, creating a situation in which we relate to our mind and heart in an adversarial way – as an enemy to be subdued, or a problem to be fixed. Greg’s teaching points to the need for the intention to understand rather than to judge, acceptance rather than struggle, and kindness instead of blame.

Another central aspect of Greg’s practice is his work with a small humanitarian aid project in support of the people of Burma, particularly targeting education, health-care, and support of Buddhist Nuns. Currently living in the high country of Northern Arizona, Greg’s love of nature and the outdoors deeply informs both his practice and teaching.