Bhikkhu Bodhi reflects on “What Kind of World Do We Want?” 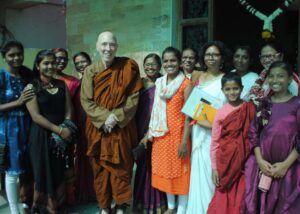 For many of us in the West, Buddhism first appears on the horizon as a path to inner peace offering relief from the tensions of daily living. This perception is reinforced by popular culture, which pictures the Buddha as a man sitting motionless with crossed legs and closed eyes, seemingly lost to his surroundings. Seldom do we think that Buddhism might hold out practical clues for resolving the complex problems that weigh so heavily on our planet. The problems seem just too big for an ancient system of contemplative spirituality.

Yet, I believe, if we as Buddhists are to adequately respond to the needs of our age, we will have to rise to the challenge. It won’t suffice for us merely to adopt Buddhist teachings as a route to deeper self-fulfillment. A predominantly personal approach to spiritual growth falls short of Buddhism’s ethical ideals and misses half its message. Greed, hatred, and delusion are not only in our mind but in the food we eat, the gas we put into our cars, and the movies we turn to for entertainment.

The Buddha taught the dharma on the basis of a far-reaching vision that pierced the depths of suffering in both its personal and collective dimensions. He offered his teaching not only as a method to tame the mind but also as a standard for ennobling us in all dimensions of our being, including the social, political, and economic. His discourses on lay ethics, communal harmony, and the duties of a king are testimony to his panoramic awareness….

As heirs to the Buddha’s teaching, we are called with compelling urgency to the task of envisaging the new structures needed to protect 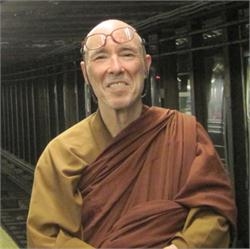 human life on earth. We have to create communities, both locally and globally, that express wisdom, care, and compassion. The word dharma means not just Buddhism but the whole body of principles that support human beings and draw out our best potentials. To be itself, karuna, “compassion,” must eventuate in karana, “doing.” Our work may begin with transforming our own minds and values but it cannot stop there. We have to go further and manifest these in action—in deeds that will build a safer, kinder, and more just world.

Venerable Bhikkhu Bodhi, an American Buddhist monk who received novice ordination in Sri Lanka in 1972 & full ordination in 1973, lives & teaches at Chuang Yen Monastery in New York State. He is a prolific translator from the Pali Canon, the most ancient collection of Buddhist scriptures & is founder of the organization Buddhist Global Relief, which funds projects to fight hunger & to empower women across the world.  This piece was excerpted from an article in August 2011 issue of Lion’s Roar magazine.