Why the Buddha Touched the Earth by John Stanley & David Loy 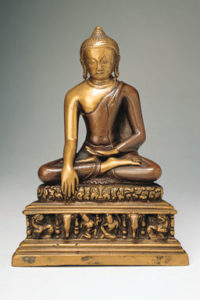 “The entire cosmos is a cooperative. The sun, the moon, and the stars live together as a cooperative. The same is true for humans and animals, trees, and the Earth. When we realize that the world is a mutual, interdependent, cooperative enterprise — then we can build a noble environment. If our lives are not based on this truth, then we shall perish”. —Buddhadasa Bhikkhu

“The term ‘engaged Buddhism’ was created to restore the true meaning of Buddhism. Engaged Buddhism is simply Buddhism applied in our daily lives. If it’s not engaged, it can’t be called Buddhism. Buddhist practice takes place not only in monasteries, meditation halls and Buddhist institutes, but in whatever situation we find ourselves. Engaged Buddhism means the activities of daily life combined with the practice of mindfulness.” —Thich Nhat Hanh

In one of Buddhism’s iconic images, Gautama Buddha sits in meditation with his left palm upright on his lap, while his right hand touches the earth. Demonic forces have tried to unseat him, because their king, Mara, claims that place under the bodhi tree. As they proclaim their leader’s powers, Mara demands that Gautama produce a witness to confirm his spiritual awakening. The Buddha simply touches the earth with his right hand, and the Earth itself immediately responds: “I am your witness.” Mara and his minions vanish. The morning star appears in the sky. This moment of supreme enlightenment is the central experience from which the whole of the Buddhist tradition unfolds.

The great 20th-century Vedantin sage, Ramana Maharshi said that the Earth is in a constant state of dhyana (meditative absorption). The Buddha’s earth-witness mudra (hand position) is a beautiful example of “embodied cognition.” His posture and gesture embody unshakeable self-realization. He does not ask heavenly beings for assistance. Instead, without using any words, the Buddha calls on the Earth to bear witness.

The Earth has observed much more than the Buddha’s awakening. For the last 3 billion years the Earth has borne witness to the evolution of its innumerable life-forms, from unicellular creatures to the extraordinary diversity and complexity of plant and animal life that flourishes today. We not only observe this multiplicity, we are part of it — even as our species continues to damage it. Many biologists predict that half the Earth’s plant and animal species could disappear by the end of this century, on the current growth trajectories of human population, economy and pollution. This sobering fact reminds us that global warming is the primary, but not the only, extraordinary ecological crisis confronting us today.

Has Mara taken a new form today — as our own species? Just as Mara claimed the Buddha’s sitting-place as his own, Homo sapiens today claims, in effect, that the only really imp

ortant species is itself. All other species have meaning and value only insofar as they serve our purposes. Indeed, powerful elements of our economic system (notably Big Oil and its enablers) seem to have relocated to the state of “zero empathy,” a characteristic of psychopathic or narcissistic personalities.

The Earth community has a self-emergent, interdependent, cooperative nature. We humans have no substance or reality that is separate from this community. Thich Nhat Hanh refers to this as our “inter-being”: we and other species “inter-are.” If we base our life and conduct on this truth, we transcend the notion that Buddhist practice takes place within a religious framework that promotes only our own individual awakening. We realize the importance of integrating the practice of mindfulness into the activities of daily life. And if we really consider Mother Earth as an integral community and a witness of enlightenment, don’t we have a responsibility to protect her through mindful “sacred activism”?

As the Buddha’s enlightenment reminds us, our awakening too is linked to the Earth. The Earth bore witness to the Buddha, and now the Earth needs us to bear witness — to its dhyana, its steadfastness, the matrix of support it continually provides for living beings. New types of bodhisattvas — “ecosattvas” — are needed, who combine the practice of self-transformation with 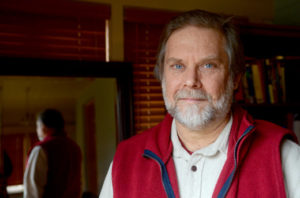 devotion to social and ecological transformation. Yes, we need to write letters and emails to the President, hopefully to influence his decision. But we may also need to consider other strategies if such appeals are ignored, such as nonviolent civil disobedience. That’s because this decision isn’t just about a financial debt ceiling. This is about the Earth’s carbon ceiling. This is about humanity’s survival ceiling. As the Earth is our witness.

John Stanley & David Loy direct & advise the Ecobuddhism Project which is dedicated to exploring a a Buddhist response to global warming.  Their website www.ecobuddhism.org is treasure trove of resources on this important topic and includes sections on Science, Wisdom, and Solutions.


See more about Other Teachers & Folks We Value
(sample) July 2014 Self Not Self And The Creative Process with Marcia Rose, Wynn Fricke and Sean Murphy
November 2014 “…in the footprint of the Buddha…” Samatha / Concentration Retreat with Marcia Rose