The Delights of Dana by Ajahn Pasanno 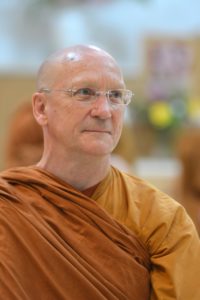 In the late 1980s, the Thai monk Ajahn Suwat was teaching a ten-day retreat at the Insight Meditation Society (IMS) with Ajahn Geoff (Thanissaro) as his translator. Ajahn Suwat had been in America for some time but he hadn’t taught a retreat to Westerners before. After several days, Ajahn Suwat asked Ajahn Geoff, “Why do the students seem so unhappy? They’re meditating. They’re here. But they seem so grim & not at all like they’re enjoying themselves.” After thinking about it, Ajahn Geoff said, “They know how to meditate, but not how to practice dana.” He saw a direct relationship between the lack of happiness & the lack of a foundation in dana.

In Thailand, where I lived for many years, generosity & giving are a child’s first teachings in Buddhism. Pregnant women go to the temple, offer food & dedicate merit: “May my child be healthy & happy.” When children are little, they get up early with their families to make offerings to the monastics walking by on almsround. Someone helps each child put a spoonful of rice in the alms bowl, and everyone claps & says, “Great!” Children get the idea: Wow, giving is good. They grow up associating generosity with pleasant feelings because it is a cultural value.

There are many different translations of the word dana. Basically, it is the quality of generosity in which we give physically and from the heart. Hearts with dana are generous, open-palmed & liberal in terms of willingness to give, share, be present & help others. All of those qualities lead us away from me & my needs, me & my preferences, me & my demands, me & my expectations, me & my desires, me & my firm place in the center of the universe.

At the root of generosity is the perception that there is always something to share. In fact, you don’t need a lot in order to give…. Sometimes we have a lot, but we feel it’s not enough & that we have to protect what’s there. We don’t even think about sharing what we have. That’s a state of lack & of being truly poor. On the other hand, giving & sharing come from a place of wealth.

There’s an old story about the difference between heaven & hell. The hell realms are filled with people who sit at long banquet tables piled high with all sorts of delicious foods & drinks. But everyone is completely miserable & hungry because the utensils are too long to maneuver. No matter how hard they try, they can’t put the food into their mouths. The heavenly realm is the same: the tables are laden with the same delicious foods & drinks & with the identical long utensils. But the people are happy & bright because they use the utensils to feed one another. There is no hunger or frustration, only fullness & well-being within the identical conditions. Giving & sharing is what turns a hell realm into a heavenly one.

One of the doorways out of suffering is generosity. It’s important to realize that dana is not just about material giving. It also involves service & keeping one’s eyes open for what needs to be done. How can I help? Who is in need of assistance? In order to feel comfortable helping others, we have to leap over the hurdle of self, of me & mine. Acts of service invite us to step out of the conditioned boundaries that we set up for our imaginary selves.

Ajahn Pasanno is a senior disciple of Ajahn Chah who for many years was the abbot of Wat Pah Nanachat International Forest Monastery in Thailand. In the late 1990s, he moved to California to head the new Abhayagiri Monastery. Ajahn Pasanno stepped back from the role of abbot in Spring 2018 but continues as an anchor of wisdom & guidance for the community.