Sister Ayya Khema on “Accepting Oneself”

It’s a strange phenomenon how difficult people find it to love themselves. One would think it is the easiest thing 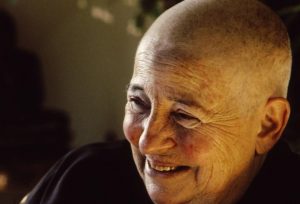 in the world, because we’re constantly concerned with ourselves. We’re always interested in how much we can get, how well we can perform, how comfortable we can be. The Buddha mentioned in a discourse that “oneself is dearest to oneself.”  So with all that, why is it so difficult to actually love oneself?

Loving oneself certainly doesn’t mean indulging oneself. Really loving is an attitude towards oneself that most people don’t have, because they know quite a few things about themselves which are not desirable. Everybody has innumerable attitudes, reactions, likes & dislikes which they’d be better off without. Judgment is made & while one likes one’s positive attitudes, one dislikes the others. With that comes suppression of those aspects of oneself that one is not pleased with. One doesn’t want to know about them & doesn’t acknowledge them. That’s one way of dealing with oneself, which is detrimental to growth…

The only thing that is real is that we have six roots within us. Three roots of good & three roots of evil. The latter are greed, hate & delusion, but we also have their opposites: generosity, loving-kindness & wisdom. Take an interest in this matter. If one investigates this & doesn’t get anxious about it, 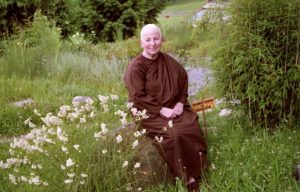 then one can easily accept these six roots in everybody. No difficulty at all, when one has seen them in oneself. They are the underlying roots of everyone’s behavior. Then we can look at ourselves a little more realistically, namely not blaming ourselves for the unwholesome roots, not patting ourselves on the back for the wholesome ones, but rather accepting their existence within us. We can also accept others more clear-sightedly & have a much easier time relating to them…

Clarity of thinking comes from purification of one’s emotions, which is a difficult job that needs to be done. But it can only be done successfully when it isn’t an emotional upheaval, but clearcut, straightforward work that one does on oneself. When it is considered to be just that, it takes the sting out of it. The charge of “I’m so wonderful” or “I’m so terrible” is defused. We are neither wonderful nor terrible. Everyone is a human being with all the potential & all the obstructions. If one can love that human being, the one that is “me” with all its faculties & tendencies, then one can love others realistically, usefully & helpfully. But if one makes a break in the middle & loves the part which is nice & dislikes the part which isn’t nice enough, one’s never going to come to grips with reality. One day we’ll have to see it, for what it is. It’s a “working ground,” a kammatthana. It’s a straightforward & interesting affair of one’s own heart.

Excerpted from “All of Us Beset by birth, decay, and death”
https://www.accesstoinsight.org/lib/authors/khema/allofus.html

Ayya Khema (1923-1997), the first Western woman to become a Theravadin Buddhist nun, served as a model & inspiration for women from all the Buddhist traditions who have sought to revive the practice of women’s monasticism in modern times. In 1987, she co-ordinated the first international conference of Buddhist nuns in the history of Buddhism, which resulted in creation of Sakyadhita, a world-wide Buddhist women’s organization. https://www.buddhanet.net/khema.htm