The Power of Metta: A Buddhist Story

It’s said that the Buddha first taught metta to a group of 500 monks who went into a particular and seemingly very congenial forest for their three month rainy season retreat… a forest adjacent to a village of strong supporters, who offered to build 500 huts for the monks to stay in during their rains retreat, and who also were happy to keep the monk’s alms bowls filled during their practice period. And so th 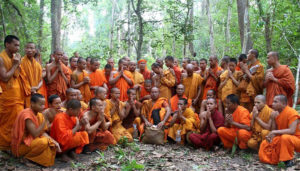 It’s said that the unseen beings… the forest devas who lived there… became fearful of the monks and felt quite ‘put out‘ of their home when they saw that the monks weren’t just visiting the forest for a day or two. And so these forest dwelling beings began to create frightening sounds and sights and emit some very distasteful odors, hoping that all this would make the monks leave what they considered to be their forest.

And soon enough the monks became quite terrified, which broke their their concentration (samadhi) and disrupted their mindfulness. Some even developed fever and pain and dizziness in conjunction with the fear they were experiencing, and all felt it was impossible to continue

practicing where they were. So they went to where the Buddha was staying and related their tale…to which the Buddha responded…” My beloved monks, go back to exactly the same forest, and practice your meditation there.” The monks responded to the Buddha’s words by pleading that they not be sent back to that forest, again saying that it was impossible to practice there. The Buddha’s response to this was, “Dear monks, because you went there to practice meditation without a weapon of protection, you have encouraged many distractions and difficulties. This time however I will give a true weapon of protection.” It’s said that at that point the Buddha offered them the Metta teaching and practice.

Out of their great respect for the Buddha, the monks didn’t dare to contradict his wishes, and so armed with the Metta teaching and practice they went back to the forest… for awhile continuing to experience feelings of fear and anxiety… while at the same time they diligently and virtuously practiced metta. Soon there were no more fearful sights or sounds, and whereas the devas had previously been hostile towards the monks… their anger and resentment disappeared when they began to feel the monk’s metta. And in fact, feelings of respect, welcome, and even reverence began to be the devas‘ experience, along with the sense of being connected, like ‘with family‘ , and the inclination arose to provide an environment of safety… to protect the monks from particular dangers that might be lurking in the forest so that they could practice meditation peacefully.

ter recovering, strengthening and deepening their concentration and openhearted presence through practicing metta, it’s said that all 500 monks at some point began practicing Vipassana meditation again with metta as their foundation. And it’s said that because they were able to practice meditation calmly and peacefully, they all became Arahants (fully enlightened beings) during that rainy season retreat.

The story of the historical circumstances which led the Buddha to first expound the Karaniya Metta Sutta originally comes from Acariya Buddhaghosa, a 5th-century Theravada Buddhist scholar, who received it from an unbroken line of elders going back to the days of the Buddha himself. This version of the story is told by The Mountain Hermitage guiding teacher Marcia Rose in her Dhamma talk ‘Metta-The Heart’s Release.’

KARANIYA METTA SUTTA
from the Buddha

This is what should be done
By one who is skilled in goodness,
And who knows the path of peace:
Let them be able and upright,
Straightforward and gentle in speech.
Humble and not conceited,
Contented and easily satisfied.
Unburdened with duties and frugal in their ways..
Peaceful and calm, and wise and skillful,
Not proud and demanding in nature.
Let them not do the slightest thing
That the wise would later reprove.
Wishing: In gladness and in safety,
May all beings be at ease.
Whatever living beings there may be;
Whether they are weak or strong, omitting none,
The great or the mighty, medium, short or small,
The seen and the unseen,
Those living near and far away,
Those born and to-be-born,
May all beings be at ease!

Let none deceive another,
Or despise any being in any state.
Let none through anger or ill-will
Wish harm upon another.
Even as a mother protects with her life
Her child, her only child,
So with a boundless heart
Should one cherish all living beings;
Radiating kindness over the entire world:
Spreading upwards to the skies,
And downwards to the depths;
Outwards and unbounded,
Freed from hatred and ill-will.
Whether standing or walking, seated or lying down
One should sustain this recollection.
This is said to be the sublime abiding.
By not holding to fixed views,
The pure-hearted one, having clarity of vision,
Being freed from all sense desires,
Is not born again into this world.

Translated from the Pali language by monks from the Amravati Monastery in England.